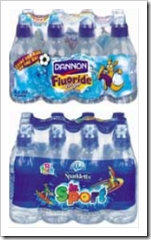 From the same company that told you that drinking more milk will help you lose weight, Dannon releases their new and incredibly confusing product Dannon Spring Water with Fluoride!  I don’t know what angle Dannon is trying to take with their new marketing campaigns, but from what I understand fluoride (sodium fluoride) is not something you want to ingest.

First of all, sodium fluoride is a by-product of copper, iron and aluminum manufacturing…a pollutant.  Back in the 1930s a study was conducted to figure out how to get rid of this by-product.  After a big successful pr effort, the conductors of the study concluded that fluoride can prevent tooth decay.

So yeah, you are probably saying, but don’t we have fluoridated water from the tap?  Why yes we do!  But check out this little tid-bid: According to a World Health Organization study conducted since the 1970s, there has been a steady decline in tooth decay over the passing years in the U.S., France, Germany, Japan, Italy, Sweden, Finland, Denmark and a bunch of other European Nations.  But, looking at the fact, only the U.S. fluoridates its water should tell you something.

Consuming too much fluoride is quite toxic.  There is enough fluoride in a tube of toothpaste to kill a small child.  Now, Dannon claims that there is an acceptable amount of fluoride in one serving of their Spring Water, however, their recommended serving size is only 8 ounces.  Does anyone really follow the serving size of anything (Unless you are on Weight Watchers)?  Also, on a hot day I have been known to consume about 3 bottles of water which is the equivalent of about 32 oz of water.  Now that could be allot of fluoride.

According to the EPA, “Some people who drink water containing fluoride in excess of the Maximum Contaminant Level over many years could get bone disease, including pain and tenderness of the bones. Children may get mottled teeth.”

Yeah, it is almost impossible to not ingest toxins, but if you can help it, why not?  And why put yourself at risk?  I’m just confused as to why Dannon is pushing products like these.  They make some awesome Yogurt and I think they should stick to that.