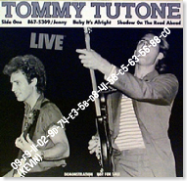 Since getting a new record deal with Spectra Records this year, Tommy Tutone has been quickly flexing their creative juices to come up with a follow-up hit to their 1982 chart topper, Jenny (867-5309).

During an interview this past weekend, Tommy had hinted some strange significance of the number to a new concept being used to record 8-track tapes.

Let’s hope this new tune brings life to the band and creates a huge and new fan base.