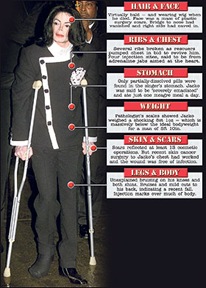 “8st 1oz, no food just pills in his stomach, bald, bruised, his ribs broken by CPR, 4 needle wounds near his heart…”

This autopsy report evidently is a fake, so don’t get your hopes up :)  You can read the actual report of the leaked Michael Jackson Autopsy at the Sun.