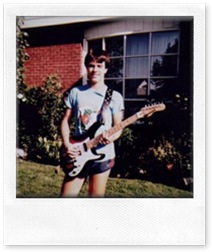 Ever since the guitar turned electric in 1931 rock stars have been twisting, bending and distorting the traditional sounds of the guitar to create unique master pieces that remain legendary.  I’ve decided to put together My Top 10 List of Electric Guitars for your enjoyment.
Rock and roll would never be if it weren’t for the electric guitar.  The first electric guitar was made in 1931 by the Rickenbacker company and has seen little change of the basic concepts other than the addition of solid state electronics.
Tons of different electric guitars have been introduced from countless guitar companies, but there remains a top few that have been used again and again since rock and roll arrived in the early 1950s.  Below are the top 10 electric guitars of the past 50 or so years that have become legendary.

10. BC Rich Warlock – An incredibly unusual shape introduced in the 1970s looks and sounds like its name.  B.C Rich was a top choice and popularized by heavy metal bands in the 1980s like Megadeth, Danzig, Warrant and Poison just to name a few.

9. Gibson SG – The SG (solid guitar) created in 1961 was popularized by the Australian based heavy metal band, AC/DC and Angus Young’s top electric guitar for sure.

8. Gibson Explorer – The airplane-looking  shape was also a top favorite for heavy metal guitarists.  The shape was so popular that it spawned numerous custom cloned from companies such as ESP.  James Hetfield of Metallica was regularly on display with this top guitar.

7. Danelectro – One of the most simple, yet flashy designs, the Danelectro was pretty and sported a cylindrical pick-up nicknamed the “lipstick.” Jimmy Page of Led Zeppelin fame made this his top choice in the last few years of the band’s existence.

6. Gibson SG Doubleneck – One of the strangest looking guitars, but one of the most versitile.  What was tops about this guitar was that the top guitar was a twelve string and the bottom a six.  This allowed for cool variations in tone and feel without the need of switching guitars during a song.

5.Gibson Flying- V – A top rock guitar for musicians who want to make a statement.  Though awkward to play in a sitting position (arguable because you can’t rock out sitting down), this guitar was actually a favorite of Jimi Hendrix.

4. Rickenbacker 425, 360/12 – There is no mistaking the sound of a Rickenbacker because of is resonating tone of the 12 strings.  Made famous in rock and roll by George Harrison and John Lennon, this later became a top pick for bands finding a more melodic yet harmonic electric tone.  Since then, bands ranging from the Byrds to R.E.M. also consider this a top pick and a staple of their unique sound.

3.Fender Telecaster – Another uniquely toned guitar made famous by Jimmy Page, this interesting single-coil pickup sound machine also sported a special “bending” device hooked to the top string that can be manipulated by pulling down on the guitar strap.

2. Fender Stratocaster – You cannot mistake the hollow, yet clear and bright sound of a Fender Stratocaster.  It is amazing that a guitar this old has remained unchanged and yet still delivers the same power that Jimi Hendrix and Eric Clapton made famous back in the 60s.  This is arguably the top choice of all Chicago-style blues players.

1. Gibson Les Paul Standard – Sexy, standard and unchanged, this top pick delivers the power and punch that has been heard by the top rock and roll bands in history.  Sporting dual humbucker pickups, this guitar’s sounds is like that of a 1960’s muscle car.  From metal, to hard rock, to punk and funk, the Les Paul Standard is arguably the most popular electric guitar in history.
Although it is nearly impossible to list these top electric guitars in any order, one can safely say that purchasing and playing any guitar on this list will certainly put a smile on your face and at the same time, conjure up fantasies of being on stage with your favorite bands. Also, check out the site From Texas To The Delta – Acoustic Blues Guitar Lessons which continues this list but also reviews a number of newer guitars that didn’t make it to this top list.  Plus you’ll be amazed at some of the guitar shredding videos posted by Paul Gilbert, famous for his Ibanez.