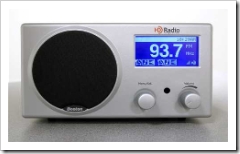 Lately I have been blasted with HD Radio commercials left and right on my commute home from work.  I couldn’t understand what the heck HD Radio was from just hearing those strange commercials.  I thought perhaps maybe it was another one of those “increase  your cellphone reception” as seen on TV, or just another satellite receive .

And no, I’m not one of those satellite types who have their radar detector-looking XM or Sirius satellite receiver on their dash. I drive by many a tree, which have been known to block out the satellite signals…so that fact alone keeps me from running out to buy a satellite receiver. Besides, I don’t think the Taurus has enough battery power to run anything else.

Anyways, after doing a little research I’ve finally found out what the heck HD Radio was…a new way to take advantage of the existing bandwidth used by AM FM radios.  HD Radio, a product offered by Ibiquity Digital, delivers CD quality sound to FM stations and FM quality to AM stations.

The cool thing about HD Radio is that it offers what is called “Multicasting.”  This technology allows stations to offer more than one stream of programming over the existing radio spectrum.

HD Radio’s technology also gives the ability to “carve” separate program streams to expand any offerings.  For example: 96.9 could also broadcast something to 96.9 HD2, 96.9 HD3…a bit like how satellite radio tags stations and streams.

Ok, neat stuff, but the question is this…was HD Radio created to enhance the consumers free radio listening enjoyment, or does it provide a means to recoup lost radio advertising revenue stolen by XM and Sirius Satellite?

I say the answer is both.  I like the fact that satellite paid services offer a huge collection of commercial-free, odd programming (I dig obscure 70’s radio hits), but I don’t like the idea of having to pay a monthly fee for anything.

With HD Radio, the only expense is that I have to purchase an HD Receiver…no subscription fee.   I only have to suffer through commercials (which is fine by me) and tolerate their experiment in gathering quality, odd programming.   Good programming will come in time I’m sure. But all this can be done while still being able to switch around through traditional AM and FM Radio stations.