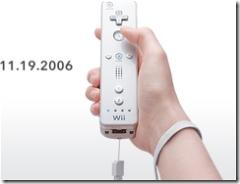 OK, enough of this Playstation 3 or Playstation iii stuff.   I’m totally psyched about the new Nintendo Wii which is ready for preorder at Walmart.  The new Wii is bound to apeal to a different crowd than the Playstation, particulalry to those who dig the Mario Bros.

This is what we have to look forward to with the new Nintendo Wii.  From a design standpoint it looks pretty cool…unlike the Ti/99 4a look of the PS3.  This thing looks more like a PC thin client or even a router.  Ok, yes, that doesn’t seem much cooler than a Ti/99 4a, but still, atleast its design has something to do with the 21st century.  The Wii also comes with what resembles a tv remote control.

This thing is totally wireless and contains 80211 and a specialized Nintendo Wii Lan adapter.  I guess you could technically take this thing to Panera to steal some bandwidth to play games.

The Wii is completely Gamecube backward-compatible, which I’m sure many of you who thought you’ve wasted money buying all six of the Gamecube games…now you can play them again on the Wii.

What confuses me though is that Nintendo is going with the PowerPC chip…considering that Apple just dumped PowerPC for Intel.  Still, I guess it really comes down to the quality of games available for the Wii.

What I’m also going to miss with this is blowing the cartridges to get them to work.  Ok you sickos, you know what I’m talking about.  Wait, ok, I guess I’m just getting old…remember the days of the NES cartridge cleaner technique?  Anyways, the Wii contains a “self-loading”  media bay that handles single and dual layer optical discs, as well as the older 8cm  Gamecube discs.

Outputting this thing should be great.  The Wii comes with an AV Multi-output port for component, composite of S-video output.  Not sure about audio output just yet, but hopefully Dolby (or dublie for you Spinal Tap fans).

Here is the new Zelda game.  Remember the days of taping your Nintendo Power map to your wall?  I’m hoping this game will give me the same rush.  I missed many days of school trying to find that magic flute.

Now this looks sweet! Nintendo, in typical Nintendo fashion, created this cartoonie looking tennis game.  But look at the angles and perspectives…nice looking graphics…the lighting is pretty neato.  What is it with their big heads though?

Now I’m not too sure what the heck this is.  Maybe some kind of exercise game?  SQUAT!  Um…er.. ok.  I have my fingers crossed for you guys at Nintendo.  Please start developing a few more games for the Wii…please?

You can pre-order the Nintendo Wii here which is something I guess I will have to do and hopefully keep it hidden until Christmas.