If word of this ever gets out to Digg then I will seriously be in lots of trouble for leaking this.  I’ve been known to say some crazy things (like Nintendo Wii sealing the coffin of Nintendo and Apple using Radio Shack to design their new Mac Books) over at Digg which got me buried quite a bit, but this time I think I’ve got it right. 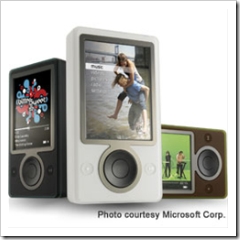 If you don’t already know, ZUNE

is the new and popular Microsoft version of the iPod.  Yeah, yeah, too little too late for Microsoft you say, but seriously, look at what Windows did to Apple’s operating system…face it, compared to the MS Windows user base, Mac OS X is just a small piece of plankton in a huge sea of home computers.

Soon many iPodders will come crawling to Zune.   This is obvious considering that Microsoft dominates the desktop scene.  It is only a matter of time when Microsoft totally integrates Zune into the Windows Vista environment.  People will not likely see the need anymore to use a third party product (like iTunes) to manage their tunes.  Plus I expect Microsoft to start having “Entertainment Packs” for Vista which would include a free Zune player.

Don’t get me wrong, I like my iPod, but it does some quirky things, or atleast acts a little too counter intuitive for my own tastes.  First of all, my everyday commute to work involves driving my beater vehicle to work, a vehicle that is only graced with a tape deck.  Thank goodness for the CD adapter to plug in my iPod.  Upon starting up my car I immediately switch on the iPod.  The music starts and then I back out of the driveway and head for the parkway.

.”  Nice tune, nice to hear it, but next up is a mistakenly downloaded and added to my playlist, title from The Cure.   You know the one:  Show me show me how you do that trick…  Ok, I admit that I played that song thousands of times back in high school, but hearing it now conjures up horrible thoughts of old girlfriends.  The best thing to do for me is to click the SKIP button…or the arrow to the right button.  What ever the heck it is.

But wait, I hit that button, I know I did, but the song still plays.  Traveling at top speed in the Taurus (about 83 mph) I glanced down at the iPod screen to see some pretty little stars.  I guess it is asking me to rate the song?  I dunno. I keep hitting that darned button (now swerving and hitting orange cones) and then looked down to see the progress meter of the song turning into a little diamond.  What the heck? All I want to do is skip the song.

By this time I’ve taken out small animals, orange barrels and a few tire treads.  Trying to figuring why my song is “shuttling” to the end.  To make a long story short, by the time I arrived at work, I had already listened to a 45 minute “mixed” version of Just Like Heaven from The Cure.  I feel like putting on lipstick and white face paint now.

So lets go down the list of why the iPod will be defeated by Zune this Christmas, according to me…AND if Microsoft learns from these peves when updating the Zune:

Zune give you this:

So if I were Apple I would be very afraid of the Microsoft Zune, regardless of how ugly it is.  Europe, best known for complaining about the MS monopoly will soon see its first Zunes very soon (this December) so if for some strange reason Europe embraces the Zune, then this certainly will send chills up the old Apple core.