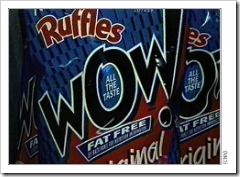 Tonight while watching Desperate Housewives my eyes were blasted with a new marketing campaign for Windows Vista.  The whole concept revolves around the idea of “The WOW Starts Now!”

Wow, I guess we are to be thrilled about Vista being released.  So much that MS has trademark yet another common word: WOW.  So for now I need to pay MS not only license fees for using SQL Server 2005, but also when I see a scantily clad woman running down the street (yes, I have a bad habit of yelling out WOW!).  Oops, there goes a few extra dollars to Microsoft.

So how does this relate to a potato chip that causes diarrhea?  Well, some of you probably remember back in the mid-90s, Frito-Lay released a fat-free potato chip called Lay’s WOW Chips.  The magical ingredient in this product was olestra…a really neat chemical that caused stomach cramps and diarrhea.  This was such a cool thing that the FDA actually required Frito-Lay to place that warning on the bag of chips.

So what should you take away from this?  Maybe something to the effect that since Microsoft has trademarked WOW! then maybe they should print warning labels on the back of the Vista packaging.  Hopefully the warnings won’t include “causes diarrhea or stomach cramps.”

Either way, with all new products, use them with caution and keep handy a roll of toilet paper.  I can’t wait to see Apple’s response to the WOW! Campaign.