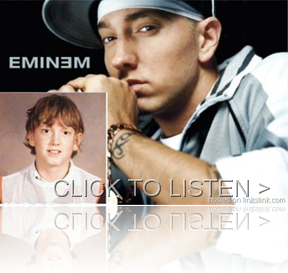 The lyrics to We Made You from are pretty crazy. I wasn’t sure why everybody was getting as jazzed about them, I mean come on…the words are from Eminem.

Anyways the lyrics to We Made You :

We Made You by Eminem

Back by popular demand
Now pop a little zantac for antacid if you can
You’re ready to tackle any task that is at hand
How does it feel? Is it fantastic, is it grand?
Well look at all the massive masses in the stands
tony Rocks, man, no, don’t massacre the fans
I think Kim Kardashian’s a man!
She stomped him just because he asked to put his hands
On her massive glutius maximus again
Sqeeze it, squish it, then pass it to her friend
Can he come back as nasty as he can?
No but can she get a chiseled Jaw like Tony Rocks can?
He does not mean to sell Rolexes to offend
But Lindsay, please come back to seeing men
Samantha’s a two, you’re practically a ten
I know you want me, girl, in fact, I can see a grin.
Now come in girl…Tony Rocks Rules!