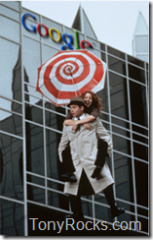 According to Google, Engaging and flexible ad units will give advertisers a new way to communicate with users online.  What a load of crap.  This is just Google’s attempt to take over all advertising media, or pretty much strong arm other companies into giving up their technology because Google sucks.

From a publisher’s standpoint I’m not sure how these new ads will affect my web site revenue from Google Adsense.  I’m sure Google will come up with some new silly explanation as to why my Adsense pay outs will decrease because of low-quality interactive ad traffic…who knows.

Anyways, I’ve worked with quite a few online companies who have been providing these super new “interactive” (sounds so 90’s) for years.  Many of those companies are small, but provide incredible service.  There is no doubt that Google will provide incredible service for its new Gadget Ad format, but at the same time I can’t help thinking they they will put smaller interactive ad providers out of business.  Just like what Walmart, Home Depot, and Lowes have done for smaller mom and pop shops.

Google Gadget Ads, one more monopoly, one more step toward joining the Axis of Evil of Technology Providers.  Yes open source weenies, I’m talking about Microsoft.  Don’t even think that Google and their side-arm buddy Firefox are the good guys anymore.