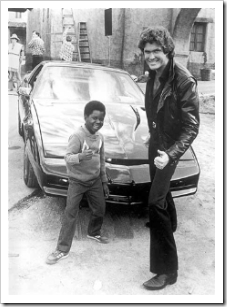 I’m sure many of you have already heard or seen the video of David Hasselhoff (aka Michael Knight) stoned drunk and eating a burger.  But you know, it all seems suspicious to me.  Yes, it was hard to watch the old Knight Rider slurring and and looking totally un-cool, but at the same time it made me think of somebody else:

The first few episodes and promotional pushes of American Idol depicted Paula Abdul as appearing tanked up, drugged up or otherwise.  How better to build the buzz of the American Idol brand than by instilling some kind of controversy.  It never came up on the show, but everyone wanted to watch her as train wrecks are awesome to see.  Regardless if the show had less than exciting contestants, atleast that had the slurring babble from Paula Abdul that would reel in viewers from YouTube to Ebaumsworld.

But enough about Paula, Lets get back to The Hoff.

NBC appears to be taking the same approach as Fox did with American Idol.   Is it no surprise that these supposed “OH MY GOSH, HE IS A MESS” videos of David Hasselhoff were leaked out to YouTube by his daughter, almost exactly 30 days before the premier of the new season of America’s Got Talent?  It is no coincidence if you ask me.  My wife usually thinks I’m a cynical conspiracy freak, but after being in the marketing field for 8 years now, you can easily spot the tricks of the trade, and this one has pre-launch written all over it.

Plus, who happens to be the producer of both American Idol and America’s Got Talent?  None other than Simon Cowel.

Sorry David Hasselhoff, you were not drunk, you were acting.  Plus, your daughter had nothing to do with releasing the video.  You should give your agent a raise.

So make sure you watch the premier of America’s Got Talent on June 5th, and I promise you that nothing will be mentioned about the video.  So it goes.

In the mean time, check out this HOT video of David Hasselhoff singing Jump In My Car.